The Daily Express writer is teeing up the population for more outbreaks of abuse with her plans to write another inflammatory and misleading article.

And she is now losing face, leaving the paper’s reputation in tatters as she continues to argue that she is a good honest journalist, say experts.

The Daily Express readership was charged 50p for her last article but the true cost may never be known.

Now as Siobhan McFadyen prepares to produce more clickbait in order to generate more froth in the Daily Express comment section she is accused of ignoring everyone with a mental age over 4.

Families were split all over Scotland after the Express announced its plans to keep printing Siobhan McFadyen.

The majority of the people of Scotland yearn for proper investigative reporting however the Express has refused to accept that people have intelligence.

At the height of her output there were violent outbreaks, death threats and ugly scenes all over Scotland as there is every Friday night. 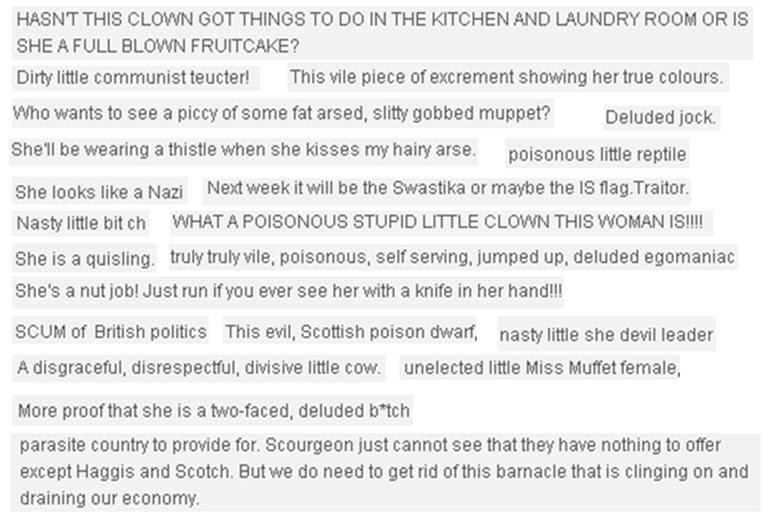 Police Scotland was forced to set up a special task force to deal with online abuse, a phenomenon which spikes after most articles published in the Express.

Many have linked the anti-immigration hysteria drummed up by articles in the Express to the recent rise in hate crime and the brutal murder of pro-immigration MP Jo Cox.

However Siobhan McFadyen appears to have forgotten the rage and disorder that plagues the comments sections of her once peaceful newspaper.

And this week made it clear she is ready to do absolutely no research to allow her to appeal to the lowest common denominator of bigoted and dimwitted Express reader.

Now Malcolm Pitt of Whataboutery Scotland says Ms McFadyen should come clean about how much venom her new articles are going to produce.

And he also says that the Daily Express is using poor journalism as a deliberate tactic that is directly affecting the stupid.

The hidden cost of this drivel is the diversion of quality journalism from the poorest of people.

They’d be far better making the Express a real success story in the world under present arrangements and earn their opinion about immigration and scrounging whinging cybernats.

Moaning about why Scotland shouldn’t be independent interferes with Scotland being wealthy and helping the poor.

Mrs McFadyen has this idea that during the referendum that everyone was raging mental, and there was blood all over the place, when all that happened was a man was hit by an egg.

It’s a very right wing approach to the world, bless her.

Ms McFadyen made the announcement that she will continue to print garbage despite the dwindling readership of the Express publication.

Just 0.008 per cent of Scots purchase the Express and the majority of them have to have it translated into picture form by a glaikit child.

To ensure that all options are open to us, this journalist makes clear that I will continue to produce my poorly researched inflammatory bile, so that it is ready for immediate publication for people who conclude that right wing reactionary low brow arse gravy is the only thing they have the ability to read.

Add your email address to receive updates when we blog and comment below if you have any thoughts on this subject. Also, use the register option on the top menu to create a profile in order to share media, create groups and chat.

This site uses Akismet to reduce spam. Learn how your comment data is processed.

Excellent rriposte to the gutter hacks of Express.

I applaud you for reporting on this issue. I have been appalled on quite a few occasions when reading this journalist’s reporting of Scottish issues. As far as I am aware she is freelance which would infer that her stories are supported by her editors. The Express is a poor excuse for a newspaper and is biased as far as Scotland is concerned on the issues of independence and the Scottish Government.

Yeh, The Express has gone crazy recently about Scotland and immigration. It’s way over the top. The article above is one of her articles with some words changed to turn it back on her. To show how shoddy her work is.

Problem is, people who get their news from nowhere else but the Express (a dwindling number fortunately), will believe what she has written. Otherwise they wouldn’t read this newspaper. When it comes to lies and distortions in the MSM, the SNP’s non-intervention policy might be classy, but is a mistake, in my opinion.

Yeh, it’s a hard one to deal with. If they try to confront the media that may backfire on them as well. The press should be free, the main reason it is poor is that it caters to what the majority click on.

To repeat some bilious comments on Twitter wrapped up in inverted commas then slapped on the front page of a “So Called” Newspaper!!! isn’t “Journalism” except maybe to that “Express” reader!!
Did I provide enough drama with the *Punctuation* there, I’m not a “Journalist” you see!

Missing the screaming capital letters, but otherwise you’ve nailed it.

Click to Learn how you can help AutonomyScotland & indy media